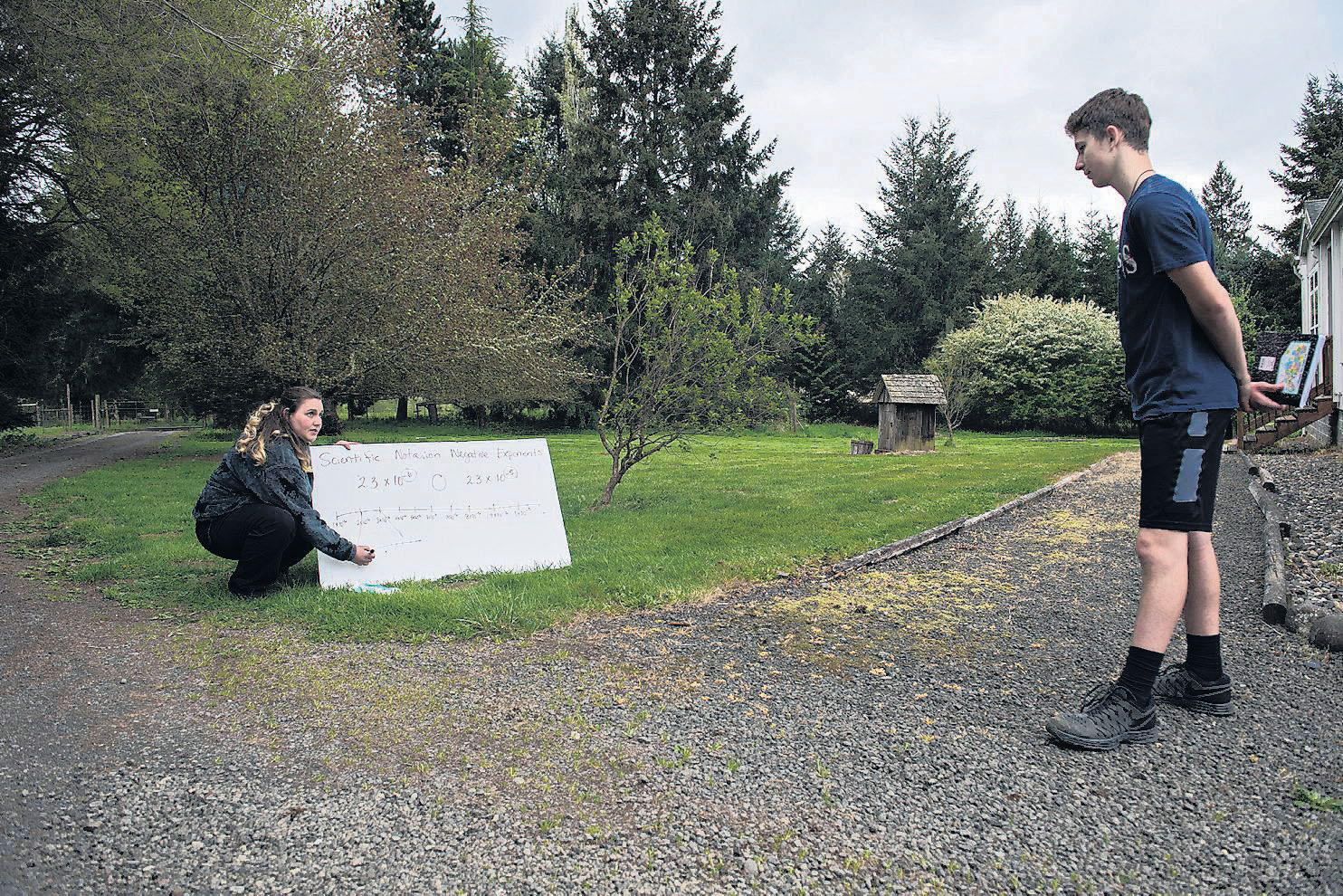 Photos by AMANDA COWAN/The Columbian; iStock.com illustration
Green Mountain School teacher Meaghan O’Leary works with eighth-grader Tyler Normine, 13, as she visits his Woodland home to help him grasp a difficult math concept. She makes brief home visits to help her students with concepts difficult to teach by video. She said she also enjoys getting to see her students. “My heart just hurts, missing them,” she said. 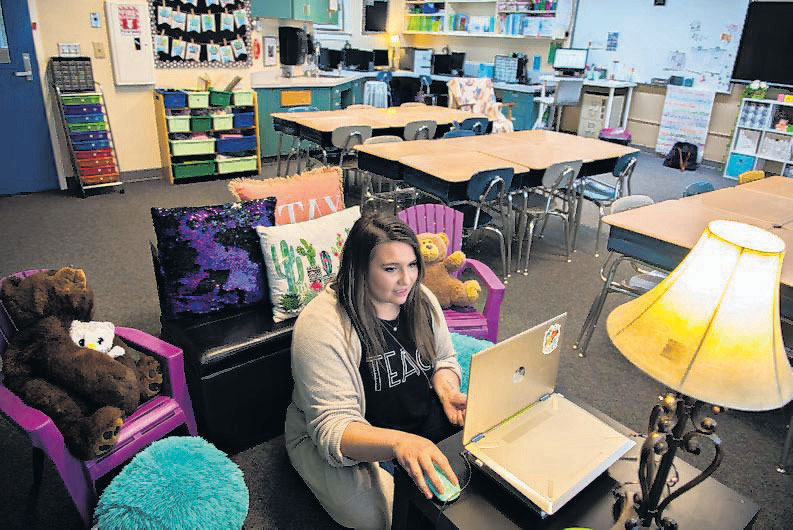 Second-grade teacher Nicole McClennen is joined by some furry friends as she records a lesson for her students on a laptop at Green Mountain School. McClennen said she tries to keep her video lessons familiar, and records them in her classroom’s cozy reading corner.
PREVIOUS IMAGE

The concept of negative exponents in scientific notation wasn’t sticking, and trying to explain the difficult concept by video or phone call didn’t cut it.

So, on a recent Tuesday afternoon, O’Leary loaded a whiteboard in her car and left the Green Mountain School to hold a socially distanced lesson in the boy’s yard.

Washington students have been out of school since mid-March due to the ongoing coronavirus pandemic, and in the weeks since, schools are grappling to navigate distance learning.

The obstacles are high for the 160 kindergarten through eighth-grade students in the Green Mountain School District. Districts like Evergreen or Vancouver public schools can rely on many of their students to have internet access, home computers or classroom computers and tablets they’ve already taken home.

Green Mountain, in a rural, unincorporated area of Clark County east of Woodland, doesn’t have that same foundation in place.

Tens of millions of families in this country do not have reliable internet access, an issue highlighted by the coronavirus pandemic.

Green Mountain is no exception; district officials estimate half of their families can’t go online due to cost or availability. The district has divvied out several “hot spots,” which create a wireless internet connection through a mobile phone network, but service is spotty or inaccessible for some families.

“The biggest problem out here is infrastructure,”

But district officials have found creative ways to ensure students, despite the barriers, are still learning. The district is doling out thumb drives to students with recorded video lessons for the week, accompanied by paper packets. Teachers are making weekly phone calls to students’ homes, and sending text messages and emails when they can.

The district’s tiny enrollment has some advantages.

Each grade has no more than 20 kids. It means teachers like O’Leary can be, as she describes it, a “push button” teacher: push a button, and she’ll be there.

Sometimes that means standing 6 feet away from a student in their yard, explaining scientific notation on a drizzly spring day.

“They all deserve it,”

O’Leary said. “All at their own time and in their own way.”

Sixth-grade teacher Mark Williams’ classroom is an echo of normal days now past.

A lost-and-found collection filled with the trappings of 11- and 12-year-olds gathers dust in the classroom.

The parent-teacher organization’s March newsletter is pinned to the door. On a small whiteboard the date “Friday, March 13, 2020,” is still written — the last day students were in school before Gov. Jay Inslee ordered statewide closures.

“I keep that there to remind me,” Williams said.

Williams recently recorded a video lesson for his students, inspired by a series of stories they’re reading about surviving in extreme circumstances.

These videos are the cornerstone of the district’s distance education model.

Green Mountain teachers are recording brief video lessons for each of their subjects and uploading them to thumb drives for students to watch at home.

While other districts are relying on Zoom conference calls and a patchwork of online educational applications, Green Mountain can’t depend on all parents having access to those programs.

These video lessons are the closest the district can get to a teacher standing in front of a classroom full of students.

“It’s gone smoother than I thought it would have,”

Second-grade teacher Nicole McClennen is in her first year at the school, which comes with its own set of anxieties and fears.

Throw a pandemic into the mix, and it feels like she is starting her career all over again.

“I’m already so good at not knowing what’s going on,” McClennen said with a laugh.

McClennen is doing what she can to make sure her young students feel at home in trying times. She tries to call her students weekly, and records her video lessons from her classroom’s pillow-decorated reading corner.

McClennen records multiple video lessons a week for her students, including unique videos for specific students who are struggling.

The district’s director of instruction and student support, Jacqui Vansoest, said the video format allows teachers to tweak their lessons for individual students, just like they would in a classroom.

Still, McClennen misses the face-to-face connection with her students — and they miss her too. One girl said as much in a recent phone call with her teacher.

“You should come to my house and look at my bedroom,” she told McClennen, rattling off a list of decorations.

McClennen pressed her, asking if she was doing her schoolwork and watching the videos.

“I’m watching them, I promise!” the girl squealed.

Williams also talks to his students every day. Mostly they want to know what he’s up to, or if he knows what their friends are doing.

That’s part of the advantage of being at such a small school, he said.

“It’s like a family,” he said. “That makes it that much more bearable.”

The Office of Superintendent of Public Instruction’s guidance on distance learning has shifted since the closures began, and continues to be updated as teachers and families navigate the difficulties of online learning.

When the department directed school districts more than a month ago to provide distance learning opportunities, Green Mountain polled its families. About half said they wouldn’t be able to access online coursework. Many are borrowing a laptop from the school, and more students every week are asking the district to send home computers. Compounding the problem is the district’s high poverty rate; about half its students are from low-income households, according to OSPI.

“Parents are having to work from home at the same time,” Vogeler said.

“Families have five, six, even seven kids, and there’s no way for them all to be online at the same time.”

The connectivity gaps highlight the digital divide in the United States, where, according to the Federal Communications Commission, 21 million people lack access to high-speed broadband internet. Those issues are pronounced in rural communities. According to the Pew Charitable Trusts’ Broadband Research Initiatives, nearly a third of households in rural areas lack a reliable connection.

“The pandemic itself is underscoring what we know to be true even in normal circumstances,” said Kathryn de Wit, manager of the initiative. “This affects tens of millions of Americans across the country every day.”

OSPI spokeswoman Katy Payne said rural districts across the state are finding ways to make learning accessible. Some communities have installed drive-up wireless “hot spots” in central parts of rural areas, so families can drive their children somewhere to do their homework. Some districts are sending bus drivers across the district equipped with Wi-Fi access, a sort of rolling router for students in need.

Many, like Green Mountain, are delivering printed homework packets directly to students.

“Our districts are creative and innovative and doing everything they can do,” Payne said. “No one was prepared for this. No one knew it would be this way. Our districts have totally stepped up.”

In Green Mountain, teachers and families are making do. Joni Tormanen’s 6-year-old son, Easton, is missing his last few weeks of kindergarten. The videos have been a blessing, she said, though Easton doesn’t seem to fully understand his teacher can’t see or hear him.

“It’s so awesome. He started talking to her,”

Tormanen said. “He got all excited.”

‘Whatever needs to be done’

Every Friday now, staff set out long tables in the gym. Along them are sprawled 160 packets, sorted by household, filled with art supplies, books, the materials for science experiments and more.

Students are also slipping postcards to each other in their packets; it isn’t easy for students to talk to each other, so Vansoest proposed the idea of sending short letters as a welcome, if distant, social interaction.

From there, paraeducator Jenny Walizer takes over as a sort of one-woman assembly line.

Students swing by the school with the previous week’s packet in large plastic bags. Walizer, wearing gloves, hands them the new material. She takes last week’s work, sprays it with disinfectant, and removes the thumb drives. She disinfects those separately, and sets them aside to be reformatted for the following week. Homework goes in baskets to be returned to teachers.

Meanwhile, Superintendent Vogeler and paraeducator Lorraine McNeal deliver packets to students whose families can’t get to school. Once a week, Vogeler loads up his SUV and zigzags across the district to visit families at home.

Sometimes Vogeler drops materials on decks, in plastic garbage bags by mailboxes or in dropboxes outside property gates.

Other times, he hands over the packets to parents, offering families a chance to tell him what’s working well, and what they still need, be it meals, a laptop or other resources.

Vogeler has been at Green Mountain for five years. He’s worked at larger schools before, but wouldn’t go back, he said.

“I was able to know the kids, but not at the same level,” he said. “You can make assumptions that are inaccurate.”

The future of classroom learning is undetermined as the coronavirus continues to spread in Washington and across the globe.

State Superintendent Chris Reykdal has suggested school closures could continue into the fall, but Payne last week said the department is still discussing whether to make that decision.

Vogeler isn’t bullish on a digital future for schools, particularly out here in the country. Nothing matches the face-to-face connection of a classroom, he said.

“It’s not a replacement for school, what we’re doing,” he said.

But until students can return to school, Vogeler will keep “delivering homework” on his already long to-do list. It’s part of being a superintendent in rural America.

“The pandemic itself is underscoring what we know to be true even in normal circumstances.

This affects tens of millions of Americans across the country every day.”

Photos by AMANDA COWAN of The Columbian